Since many of our guests at Kapama are from outside South Africa and often first time visitors to our gorgeous country, most game drives start off by being about finding the big stuff, like elephants, rhinos, buffaloes, and big cats. Giraffes, zebras and other general game make the list too, so there’s seldom a dull moment, but sometimes you come across something you didn’t even think to hope for. One morning, after a few very successful drives in which we spent a lot of time with most of the Big Five, we left a particularly good lion sighting and came across one such surprise sighting: three ground hornbills foraging in the road.

Ground hornbill in the road on Kapama

Ground hornbill through the grass at Kapama

Anyone who’s ever come across a ground hornbill will tell you they’re fascinating birds, not just in appearance, but also in their habits. They’re large (nearly 4 kilograms heavy and up to a meter tall), black and heavy looking, with adult birds boasting bright faces and wattles. If you’re lucky enough to see them it’ll probably be when they’re ambling unhurriedly through the bush, rooting out goggas (bugs), rodents, lizards and just about anything that takes their fancy. Up close (they’re sometimes inquisitive enough to approach vehicles) they have large, intelligent yellow eyes, and long dark eyelashes that would give the Kardashian sisters a run for their money. Even if you haven’t seen them, it’s possible you’ve heard their deep, reverberating booming call early in the morning, like a distant lion roaring at the rising sun. 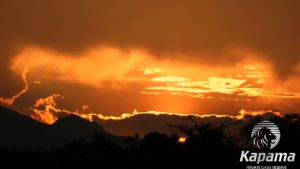 Ground hornbills are critically endangered, mainly because they’re so picky about where they nest – big, natural holes in old trees are hard enough to come by even in protected areas – but also because they have very specific requirements for successful breeding. Every pair mates for life and needs at least one other pair of helpers to help them keep a handle on things, even though only one chick from every brood survives. This chick is dependant on his/her team of caregivers for over two years, which means that even those who find a suitable tree and have responsible helpers can only raise one chick every three years. You might be justified in thinking it serves them right for being so difficult, but perhaps the fact that they’re the only bird species believed to play with their chicks might redeem them.

So every ground hornbill sighting is one to cherish, and whenever I get the chance to share those sightings with guests from home or abroad, I hope they’re if not more, then as memorable as all the big stuff.