A hyena a day keeps the leopards at bay

Not just a cackling scavenger… Though many think of them only as pilfering scavengers that feed off the efforts of other predators’ hard work, spotted hyenas are so much more interesting. They’re hunters as well as scavengers, and like most animals they’re fiercely protective of their young.

Guests are usually quite happy to see them, even if not so happy to smell them, but it’s unusual for them to ask to see hyenas specifically. So when guests, Mary and Mark Degut, climbed on my vehicle for their evening drive and told me to find them some hyenas, I took them straight to an active den.

We arrived in time to see a couple of pups out and about, but it was the three adults running around the den in their loping manner that immediately caught our attention. They were agitated, clearly uphappy as they loped back and forth marking their territory, so I kept my eyes open for other predators.

Before I could even say the word ‘leopard’, let alone take a picture, the culprit had zipped across the road and bolted into dense bush with three adult hyenas hot on her heels. We watched until they were out of sight and listened for sounds of a fight that never came. 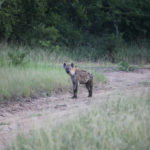 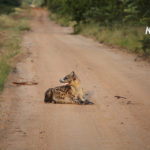 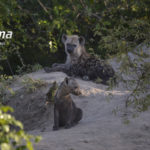 Leopards, like hyenas, are well-known opportunists. Had those pups been playing alone and unprotected outside their den, that leopardess wouldn’t have hesitated before snatching one up for dinner. To be fair, if those hyenas had come across a leopard cub, they’d have done the same. This time, however, everyone made it out alive, and we breathed a sigh of relief. Naturally, it took a few moments before what we’d just seen sunk in, and another few before any of us could complete a full sentence!

It was one of those quick, unexpected sightings that only last for a second or two, but stay with you for a long time. And it was a firm reminder that for predators, including the ungainly hyena, survival is hardly a picnic.