All creatures great and small – Kapama has them all

Kapama Game Reserve is renowned for the rich variety of animals which guests are able to view on an average game drive – and no wonder – as the reserve forms part of a region that has an extremely high biodiversity of animals great and small. This area, called the South African Lowveld, is home to more than 500 bird species, 140 mammal species and 110 reptile species, making safaris in this area a special attraction for visitors. Kapama Southern Camp, for instance, has a resident porcupine named Elvis. He is not a pet, but rather a habituated nocturnal tenant who visits the camp most nights, offering guests an up-close view of his impressive array of quills – which ensures he gets ample space and respect from the camp staff! He is quite a celebrity having been photographed extensively by delighted guests.

As the third largest of all the rodents, porcupines are covered with sharp quills that protect them against predators such as lions and leopards. Contrary to popular belief, porcupines are unable to shoot these quills at their enemies, but rather release them upon impact. New quills replace those that fall out. Another resident found at all four lodges on the reserve is the tree agama. Females are rather dull in appearance, but their male counterparts have bright blue heads and stunning rainbow-coloured bodies. When threatened, they retreat to the opposite side of a tree trunk, always keeping the trunk between themselves and the danger. Anyone who has tried to take a photo will know exactly what the game ‘peek-a-boo’ is all about – and the tree agama is an excellent player!

If hiding does not work, then they open their mouths wide, revealing their bright orange mouth lining – but be careful – they can deliver a painful bite if caught. At night they sleep in hollow branches or under peeling pieces of bark. Night drives at Kapama often produces sightings of more elusive creatures such as this aardvark photographed by guide, Willie Pienaar. Although they occur right across Southern Africa, they are hardly ever seen because of their secretive nature and nocturnal habits. When foraging for food, they move their long snouts from side to side picking up the scent of ants and termites. Once located, they lick them up with their long, sticky tongues. Many visitors (and guides for that matter) have a bucket list of animals they just have to see and one of the most difficult to tick off the list is the caracal – also known in South Africa as a “rooikat” or “red cat”. These predators spend most of the day resting and usually become active after sunset, but even then they are extremely difficult to track down and seeing them is rare. Recently guide Alister Kemp, had an incredible sighting. Shortly after this photo was taken, the caracal jumped into a dense tree and out of sight. What an unforgettable experience! Sometimes a game drive is so good it is the pinnacle of game drives, and for Alister Kemp his luck did not stop with the caracal sighting. The African wild cat, like caracals and aardvarks, is usually only seen after dark, but Alister and his guests were fortunate to come across one during the day on a beautiful, warm afternoon. They were driving in the south-western section of Kapama looking for lions when a small tom suddenly appeared from nowhere. Their long legs, bright brown and orange markings on the back of the ears, and upright seated posture help to distinguish them from domestic cats. One of the most impressive creatures found on Kapama is the African rock python. The scales of the python are small and smooth to the touch, and those around the lips are fitted with heat-sensitive pits, which are used to detect their warm-blooded prey even in total darkness. Thomas Ndobe photographed Adolf Khosa, River Lodge bar manager, and snake expert Donald Strydom, holding this huge specimen which was found on safari. Getting a “hug” from a python is a once in a lifetime event! On the subject of scales, the largest reptile on the African continent – the Nile crocodile – can be found at home in the largest water body in Kapama – the Klaserie River. Seeing these giants basking on the scenic banks of the river or slowly cruising through the water will give even the bravest traveller a chill down their spines. The crocodiles share the reserve’s rivers and waterholes with another stealthy hunter – the grey heron. 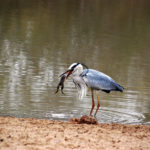 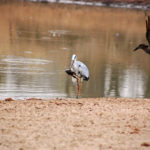 On many occasions these tall birds have been witnessed in hunting mode, standing like a statue in shallow water motionless for hours on end, waiting for the right moment to spear its prey with a long, sharp bill. The long neck of the heron helps to propel the beak with speed and precision when it catches fish, reptiles, insects, small mammals and, in this case, a frog called a “platanna” or direct translation a “flat Anna”. This frog species releases a poisonous chemical when threatened, so the heron first rubs it against a log, rock or another hard surface, to clean it before swallowing it whole. Guide Jaco Venter, recently witnessed a group of white-backed vultures and hooded vultures devouring a buffalo carcass on Kapama. They are two of the nine species of vultures that have been recorded in South Africa. Vultures fulfil a vital role in the eco-system as they prevent the spread of disease by cleaning up after large predators such as lions and spotted hyenas. Watching them circle high in the sky is often the sign of a kill in the area. Last, but not least, don’t dismiss the common impala. Bachelor herds can make great subjects for photography, especially in the rutting season, when the males start competing for dominance. The sounds of grunting are often followed by an action-packed locking of horns as two rivals measure each other up and start kicking up dust! 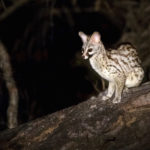 Other interesting sightings at Kapama include:

Spotting some of these creatures mentioned always surprises and often delights guests. Take the time to stop and watch them – your safari experience will be richly rewarded.