It’s Nature after all

For some of us who are intrigued and fascinated by nature, the closest we can come to engross ourselves in the activities of the animal kingdom is by switching over to a documentary or dedicated channel on TV and be mesmerised by the wonderment of our planet.

A wildlife photographer and producer sits patiently for hours to get the captivating footage, only to labour for a few more hours afterwards editing the film for the final copy to give us a taste of what happens out in the wild. In some cases, only the key elements, or snapshots are portrayed. The short stalk in the thick brush by one of the camouflaged big 5. The strategic surrounding of the identified prey. The pounce. The fatal bite to kill the victim. Then finally to finish it off, the sunset scene of the satisfied predator after eating its fill of its decimated prey. Perhaps they omit some of the graphic footage as it may be too sensitive for some viewers, thereby diluting the rawness of nature. After all, not everyone is up for seeing the gory images of an animal kill.

The build-up and reveal of this consolidated scene playing out in the comfort of our lounge definitely portrays a great sense of what it might be like in the openness of the African wilderness and the perils that befall some wildlife, should you not have the opportunity to be out on a safari.

But witnessing it first-hand for yourself, is something quite different altogether.

I have been a ranger for more than seven years. During this time, I must admit I have only been fortunate enough to witness the scene described above a handful of times. The most recent one for me was about a month ago.

I was out on a game drive with a few guests. We had not gone too far from the entrance of Kapama’s River Lodge when off in the distance we spotted two female lions. They seemed to have singled out a young buffalo. I came to a stop and watched patiently for a while to allow the scene to unfold before our eyes. It appeared that one female lion had already made her move.

We had clearly missed the initial build-up, which included the identifying and formidable stalking of the prey. Lions will usually get up close to the prey before charging and in some cases as close as 10m. We were fortunate enough though to have come across this scene at the most crucial point, just as she pounced on the young bull.

From what we could see, the young buffalo was still alive and fighting desperately for its life. I explained to my guests that the lioness was not fully grown either by the way she was struggling to kill the buffalo and keep it in her grasp. She lacked the experience of a mature and older lioness which was evident by the way she was trying to grip the buffalo’s throat. She was not holding long enough to kill her prey. 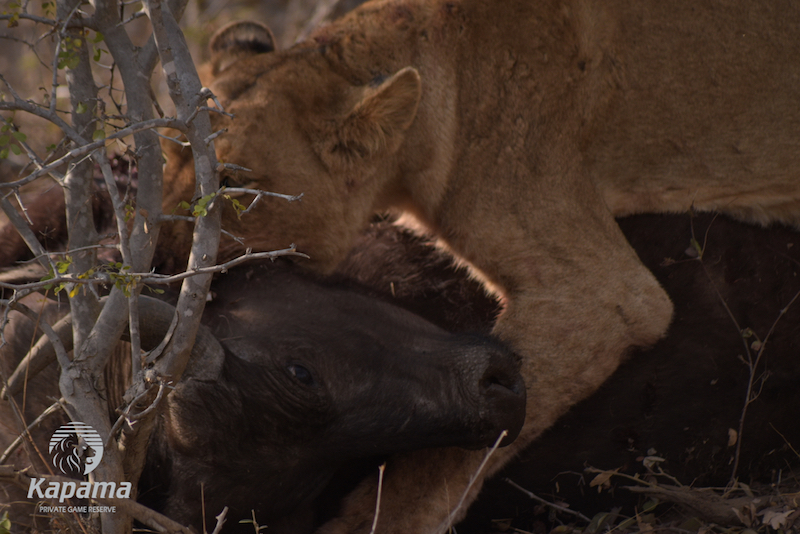 Eventually, instinct took over and she went for the grip known as “the kiss of death”. That is when the lion covers the prey’s nose and mouth and suffocates it. She clamped down hard with her powerful jaw and stayed there for what seemed like forever, but in fact was only around five minutes or so. We watched as the buffalo slowly stopped struggling, all life leaving its body, to become completely limp. The lioness released her grasp from the young buffalo’s mouth.  She took a moment to catch her breath, before settling in to devour the carcass. My guests were beyond speechless. It was a sad scene to witness, as one animal died for another to live. One of my guests commented that they could not quite compare what they had just seen, live and right in front of them, to watching a documentary at home. They were exposed to the brutal, natural, harsh, rawness of nature and it played out in full view of them, completely uncensored. They had been so close and it was so real, I could tell they had mixed emotions.

We sat there for a few more minutes, allowing what we had seen to sink in and for my guests to appreciate what they had just witnessed. Even though it was sad to watch, it’s the truth of nature. My guest may never get to experience Africa in such a raw way again, but I know without a doubt that we all felt privileged to have front row seats and be part of nature’s live audience.