It is quite ironic that the very water we depend on for survival can sometimes become such a destructive force that you can just watch in awe as tiny trickles of water becomes raging torrents and leave behind total devastation in it’s wake.

Last week we got to experience a cyclone in our area and basically got our whole seasons’ amount of rain in 48 hours. This off course caused massive floods in our area and unfortunately we were not completely spared the chaos and devastation that comes with that much water.

Roads were damaged, bridges and dam walls collapsed and we also lost one of our lodges which were build on the banks of the Klaserie river which is normally a serene little waterway that added to the ambience of the once awesome Karula lodge, who’s guests had to be airlifted out as none of the roads leading there was accessible.

For quite a couple of days game drives was just impossible and should we have attempted that, it would have been extremely dangerous as in some areas the ground was just too soaking wet and unstable, and tiny drainage lines on the reserve became torrents like these below and other images from in and around our Reserve. 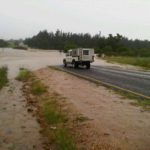 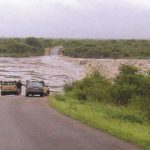 Despite all the damage, the total loss of life according to authorities was only 6, which is a miracle if you take into consideration that 47 informal villages towards our South were completely destroyed. We are however over the worst and our operations are back to normal. We are also planning to repair Karula as soon as possible and we should manage to do that in just a little over three months.

Floods like these are not completely uncommon in the area, as we went through a similar event in February 2000. During these floods however the most damage where to our South –east and the well known Kruger National park had to bare the worst of those which luckily just caused a bit of heavy rain on our side, I guess you can’t be that lucky all the time and mother nature surely knows how to get your attention every once in a while…