Putting Your Head Into It

Coming across two male giraffe in a clearing, on a game drive with my guests from River Lodge,started off to be quite relaxed or seen as a normal sighting of two “long necks”. As we approached, we discovered that there was more to this meeting than we thought. These two were sizing each other up!

Giraffe males will stare at each other to either intimidate the other into submission or determining where to place the first blow. Male giraffe will make use of their necks and heads as powerful hammer action tools to either unbalance or knock down the other individual in order to establish dominance. The neck is supported by powerful muscles and reinforced ligaments.

This action is commonly referred to as necking, but in fact is known as ‘sparring’. ‘Necking’ refers to the behaviour between males and females during courtship or bonding. Younger males have also been observed displaying this behaviour, but more for practice to use when they are older.

The sparring session between two males will not determine dominance over a herd but rather over mating privileges when a female giraffe goes into oestrous. The two males will continue swinging their head and necks at each other in the hope to land a well-placed blow that will either knock them over, knock them out or encourage them to submit defeat and move away. Giraffes are not predators and will not kill other animals. Their huge skeletons do require more calcium and phosphorous than they can get from eating leaves, so are known to eat the bones of other animals to supplement their diets. 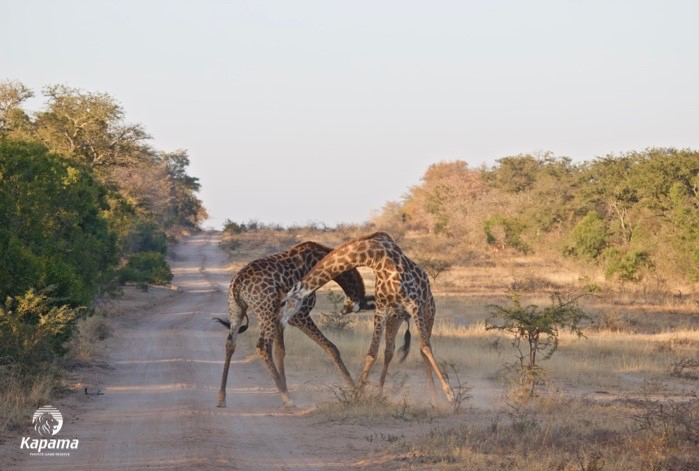 Hitting their heads against each other causes the hair on top of the ossicles(horns) to rub off and cause their skulls to grow bumps. The bold horn tips are also an easy sexing tool because female will have black tuffs of hair on their ossicles. Giraffes still only have seven vertebrae in their necks – the exact same number of bones as a human neck!

These two males went about their business for a good 20 minutes with a few well-placed blows that could be heard from a distance. The commotion even attracted some onlookers. Other giraffe had ring side seats to this showcase of dominance. Even some blue wildebeest stopped to watch for a few minutes while passing by. After a while the smaller bull gave up and moved away in submission with the ‘champion’ following him to make sure that this matter was dealt with. Both males made their way back to the tree line and continued feeding now that dominance was determined.