Lurking in the waters

It’s winter here in South Africa, but in the bushveld temperatures can still reach nearly 30 degrees Celsius during the day. As the African sun climbs, animals wander to the nearest waterhole – home of the crafty crocodile. 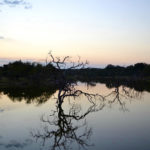 The largest of Kapama’s water sources is the Klaserie River. This area of the reserve boasts some beautifully scenic views and it’s where crocodiles maintain a particularly large stronghold. That’s not to say it’s safe to swim in any of our other bodies of water! Throughout the warmer months it’s quite common to see these scaly giants sunning themselves on most sandy banks. 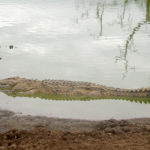 Crocodile moving out of water 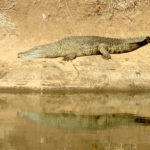 Late one morning while out on drive, we stopped beside one such waterhole. There were no crocs to be seen, but the tension in the air was tangible as wildlife gathered for a drink – they knew what could be lurking beneath the surface waiting for the perfect moment to strike. A warthog approached to wallow in the mud at the water’s edge, risking the danger for a little relief from biting parasites. Crocodile lurking in the water

Within seconds, a toothy grin appeared right in front of the warthog and with a quick and efficient SNAP the warthog was caught. Razor sharp tusks are no match for a scaly suit of armour, and soon the writhing warthog disappeared into the churning water. We all seem to share a natural fear towards these prehistoric creatures – it’s probably what fuels our fascination towards them. Watching them basking on banks or cruising slowly through the water is enough to send a chill down most spines, but watching one rise up out of the water to ambush its prey was a reminder that, out here in the African wilderness, we may not be quite as firmly at the top of the food chain as we like to think…