Secrets of the bush

Many come to Africa to see and experience the notorious “Big 5” and know very little about the other secretive creatures that occur in the wilderness. Therefore, I decided to share some information on these interesting, and rarely seen animals. 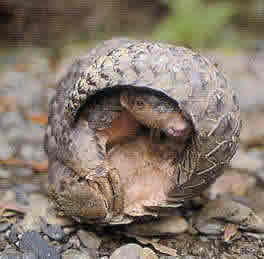 The Pangolin, also known as a scaly anteater, is something that is spotted very rarely – less than the shy Leopard. The Pangolin is extremely endangered due to the belief that their scales are medicinal. Nevertheless, the scales are formed from keratin, the same substance in the human hair or nail. It will use these strong, sharp-edged scales to protect itself and its young by rolling up into a ball, protecting its un-scaled belly.

Pangolins are carnivores and eat mainly termites and ants using a long, muscular and sticky tongue, as well as strong forelimbs for digging. Interestingly, their tongues are not situated in their mouths but rather near its pelvis. When extended, the tongue can be as long as the body. The Pangolin is an interesting animal and not much is known about this exclusive creature. 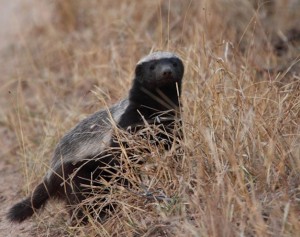 The Honey Badger, or Ratel, is another one of the secretive creatures of Africa. As the name suggests, Honey Badgers will attack bee hives to get to the honey. However, they will also eat the bee larvae. They are also known to eat birds, hares, snakes and even on occasion, small antelope. With regard to snakes, Honey Badgers are believed to have certain immunity to a snake’s venom. The most damage that can occur would be getting sick but once slept off; the badger is as good as new again.

Honey Badgers give the illusion of being “cute and fluffy”. However, they can be extremely aggressive when they feel threatened. They are known to take on fully grown male lions on their own. One of the reasons that they are so brave is that they have extremely loose skin and very long and sharp claws. Therefore, they can literally turn in their own skin, face the attacker and attack it with its claws. 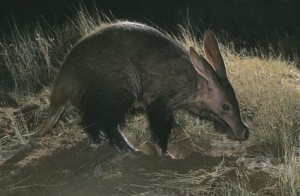 The Aardvark, or Antbear, is another one of our most elusive animals. Like the Pangolin, it has a long, sticky tongue and eats mainly termites. They are nocturnal and will travel far distances at night to find the biggest and most inhabited termite mounds. With its strong feet and claws it can dig through the strong walls of the termite mounds. It has thick skin to protect it from bites from other insects and, interestingly, it can close its nostrils in order to avoid insects from entering them.

During the day, the Aardvark will sleep inside an underground burrow in order to keep cool. Ironically, it will use abandoned termite mounds for this purpose.

I hope this has given a different insight to the African bush and that many will be more aware of the other interesting and amazing creatures that occur in nature. Nature at its best would not be the best without all other components.