Deep in the African bush lies a variety of creepy crawlies, lazy leopards and cheeky monkeys, but most will agree that the fearsome lion is the most incredible – when he’s not asleep! The king of predators often keeps us on the edge of our seats, and on this particular day, it kept us holding our breaths as well.

“Lion! Lion!”, hissed one of my guests as he caught a glimpse of tawny fur through the bush. I hit the brakes not far from a lioness lying prone in the grass and was delighted to discover she wasn’t sleeping, but stalking! A glance in the direction of her focused gaze revealed a delicious herd of buffaloes marinading in a mud pan.

“Rassie, isn’t this lion a little small to catch a buffalo?” another guest asked hesitantly. “On her own, yes, but I have a feeling she’s got her eye on one of those calves…”

Suddenly, four more lionesses jumped out of the bush, scaring the buffaloes into the tickets. The air was filled with anticipation and the sound of thudding hooves, and there was no way we could keep up with the action. Instead we waited on the road to listen for the kill.

Four minutes passed in absolute silence, giving the dust just enough time to settle before being kicked up again by the whirlwind herd of buffalo in the road behind us. They stopped and turned, anxiously staring into the bushes, so we crept back to take a closer look. The lions had caught a small buffalo calf, much to the dismay and the milling herd, which lingered, stomped and mobbed the lionesses until they backed off and relinquished their injured meal. The buffalo herd surrounded the calf and wasted no time running away, with the lionesses hot on their heels once more. 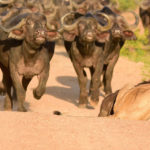 The chase went on for another thirty minutes, with the injured calf lagging further and further behind. Its mother persisted in fighting off the hungry cats, until the pride split up and managed to separate her from their prey for good. The buffalo herd finally admitted defeat and left the lions to their meal.

Mother nature never ceases to amaze, and although this wasn’t everyone’s idea of an enjoyable sighting, it was truly awesome to see nature unfold before our very eyes.