We often spend our guests’ final drives checking off any animals on their lists we haven’t yet found. One of my favourite animals to watch and photograph is giraffe, and recently we’ve come across a few male giraffes in the behavioural act of ‘necking’, a kind of dance between two giraffes flinging their necks at one another. Sometimes it’s between two young giraffes play-fighting like brothers, but sometimes it’s the real thing.

Male giraffes use their necks and heads as weapons to establish dominance, and males that win necking bouts impress more lady-giraffes and have greater reproductive success. There are two types of necking: low intensity necking, where combatants rub and lean against each other and the male that can hold itself more erect wins the bout, and high intensity necking, where combatants spread their front legs and swing their necks at each other, attempting to land painful blows with their short, stubby horns or ‘ossicones’. The power of a blow depends on the weight of the skull and the arc of the swing, so contestants need to dodge blows and counter with well-aimed swings of their own.

A necking duel can last more than half an hour, depending on how well matched the combatants are, and although most fights don’t lead to serious injury, there have been records of broken jaws, broken necks, and even deaths. After a duel, it is common for two male giraffes to caress and court each other, with the victor even mounting the loser in a show of dominance, proving he is the more ‘manly’ of the two. 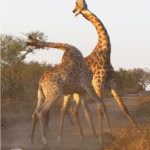 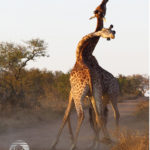 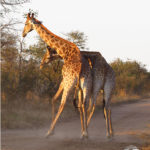 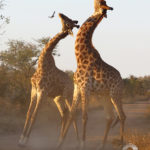 It’s easy to sit and watch them for long periods, forgetting the time and violence of their unique dance. Their necks swinging and their long legs moving through the dust to a rhythm only they can hear is absolutely mesmerizing, and when their song is finished, they move off as if they hardly noticed us or the flashing of our cameras.

Giraffes are very iconic animals in Africa; extraordinary creatures that really make guests feel part of our true African wilderness. When you visit us the next time, be sure to ask your ranger to stop and appreciate them for the incredible animals that they are, and if you’re lucky enough to see them “necking”, watch them dance!