The leopard that wasn’t

“Fresh lioness tracks” said Colly, my tracker, pointing at the perfect print in the dirt. Our guests leaned in, listening intently, as he explained how he could tell. “See the size? It’s too big to be a leopard, and too small to be a male lion. And it’s on top of my vehicle tracks, so that means she walked here after our last drive. She must be close.” I smiled at their nodding faces. “Shall we go find her?”

The answer was a unanimous yes, of course, so we set off deeper into the African bushveld in the footsteps of our elusive cat. Before long, the telltale warning ‘sneezes’ of impala and ‘kek-kek-kek’ of vervet monkeys alerted us to the whereabouts of a predator up ahead, so we abandoned the trail and rushed straight for the ruckus.

“There! At the top of that tree!” came a call from the back of the vehicle.

‘Leopard’ was my first thought – after all, lions aren’t often found in the treetops – but then I considered the likelihood of finding a leopard in the exact same neck of the woods as the lioness we’d tracked there. It’s not unheard of, but you’ve got to have a lot of luck on your side, so I stopped the vehicle for a closer look. 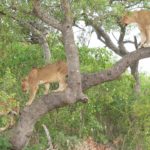 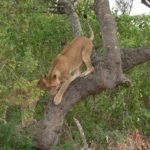 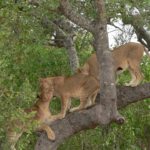 Exclamations along the lines of ‘no way’ resounded in chorus from my guests, and if I hadn’t seen it for myself I might have joined in. It’s not that lions can’t climb trees, it’s just that they usually don’t. Unlike leopards, which are like acrobats – lithe and comparatively small – lions are all heavy muscle, like bouncers at a night club, which makes it very difficult for them to haul themselves up and balance. Also, smaller branches can’t hold them, so the top of the canopy is off limits.

Once we’d pulled up closer there was no disputing it though – three big lionesses, playing in a tree. Not only had we found the lioness we were tracking, but we’d caught her doing something very unusual.

Knowing how special it feels to track and find an big cat for the first time, I turned in my seat and wasn’t surprised to find a truck-full of grinning faces and quiet applause.