As rangers, we encounter Africa’s most feared animals – known as the Big Five – on a daily basis. Game drives are all about experiencing wildlife from a vehicle. The excitement, fear, anxiety and respect exceed the expectations of guests, regardless of their country of origin – but this, in turn, is superseded by tracking one of the Big Five on foot. Saying it’s exciting is a huge understatement.

The first rule of the bush walk is never to run. This doesn’t sound like much, until reality strikes. I recently went on a bush walk with eager guests who wanted to experience wildlife at ground level. As a trail guide, nothing gives me more pleasure than to share this excitement with guests. We left Buffalo Camp just after breakfast, and took a short drive to where we would start our walk.

About 20 minutes into the drive, I saw very fresh tracks of one of the bush’s giants – a fully grown white rhino. We stopped to look, and after checking the wind direction we decided to follow these tracks.

I repeated the safety guidelines for the walk before we started following the rhino tracks. Walking through the savannah/woodland, the guests realised it was not all that easy, with many thorn trees and tiny pepper ticks to scratch and irritate the legs. After 20 minutes of tracking the giant animal, we found a fresh rhino midden. Everybody felt even more excited and anxious, and were determined to continue. 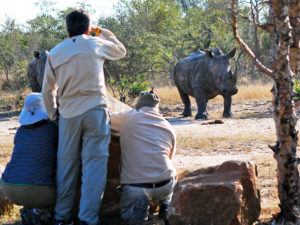 White rhinos are aggressive when they feel cornered, but they are relaxed when they have an escape route and don’t see or smell intruders. We proceeded cautiously and carefully, without speaking or stepping noisily. Suddenly, I signalled for everyone to stop, and whispered: “Sleeping rhino.” The massive animal was about 20 metres (60 feet) away from us, sleeping under a tree.

With the breeze in our favour, the animal didn’t smell us. We took plenty of photos of the majestic beast, until the wind shifted and the rhino smelled us. From total relaxation and sleep, he was instantly alert and on his feet in a split second. We immediately got up and circled around to have the wind back in our favour, and the animal settled down again.

We spent about 30 minutes appreciating the majesty and wonder of this enormous animal before deciding it was time to move on. As we left, the wind shifted again and the rhino was back on his feet and fully alert. Sometimes, the expressions on guests’ faces while on a bush walk remain in my memory forever. That day was one such time.

Rhino are very curious, and will advance upon intruders because their eyesight is extremely poor. They simply want to understand what the intruder is and whether it presents a threat. We stood up silently and backed away from the rhino before continuing on our bush walk – I believe you shouldn’t disturb wildlife, and should rather appreciate them and leave them as you found them.