Why is the rhino so special? 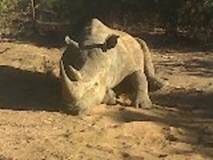 The are 5 species of Rhino

Rhinos are part of a very complex family. There are five different species.

The biggest problem is that rhinos cannot breed like antelope. The reason for that is because their gestation period is extremely long – 15 to 16 months. The calf stays with the mother for at least three years and she will protect them at all costs.

The rhino bulls will fend off all other males in the area even the calves if he wants to mate with a female. Rhino males are extremely territorial and will only allow another bull into the area if he shows submission.

Rhinos have very bad eye sight but have an extremely acute sense of hearing and smell. But as sad is it might be, only three of the rhino species still exist and that is the white rhino, black rhino and the Indian rhino.

Rhino horns have no value, contrary to popular belief, and is made out of the same material as human hair and nails called keratin. Humans are rhino’s main predators and if we don’t do something to save them then they will be extinct in less than ten yeas.