It is no secret that we love images of elephant calves here at Kapama Private Game Reserve. After all, what could be more adorable than baby animals playing together? Viewing these sprightly, good-natured elephant calves in their natural environment makes for a marvellous safari drive. 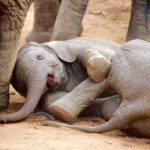 Leaving Karula for an evening game drive with four Geman guests, I discovered evidence of elephants on the road – unmistakable, huge circular tracks, not far from the lodge. I immediately told my guests to be on the lookout and their faces lit up with excitement. Within seconds, they were camera ready! 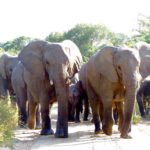 One elephant made a brief appearance and then suddenly there were more. Parked near a waterhole, waiting and listening for the crackle of broken branches, the entire herd materialised and ambled towards us. Passing just a few metres on either side of us, these gentle giants wandered towards the water with three calves between them – two very little and one slightly larger future giants. The herd of elephants wallowed in the mud for some time before moving on again. The sun was setting and the light was absolutely beautiful for photos of these three show-offs rolling and chasing each other up and down the dirt road as if they knew they had an audience. Elephant calves rolling in the dirt 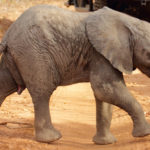 Elephant calve running up and down the dirt road

Testing their strength against each other with their bodies, heads and trunks, the two smaller youngsters wrestled, rolled and kicked, before teaming up to take on the older calf. As cute as they were, it was clear to see that in nature, there is always a territorial aspect involved. Two elephants showing of their strength

The following day, with a warm blanket and hot water bottles, we made our way back into the bush for a morning game drive. We came across a heartwarming display, a herd of elephants was standing in a circle to protect their calves from a possible threat lurking in the bushes. 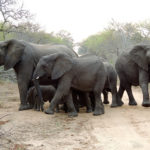 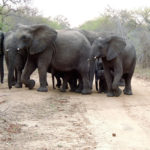 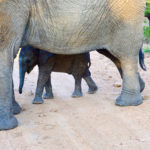 It really is a wildlife wonderland here in the African bush. Every day is a new adventure and we are so often lucky enough to witness a little bit of the magic of Southern Africa. 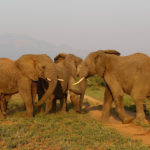